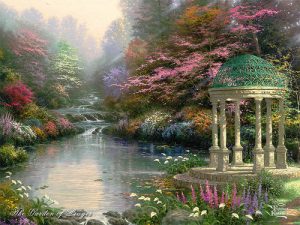 The Garden of Prayer by Thomas Kinkade was painted in 1997. It depicts a gazebo set in the middle of a garden, alongside a serene pool fed by a creek. Calla lilies, foxglove, and a host of other colorful flowers grow at water's edge. The Garden of Prayer was the first of Thomas Kinkade's paintings to feature calla lilies, one of which was painted by little Winsor Kinkade, his daughter, while sitting in his lap. Calla lilies celebrate Easter and the resurrection.

There are 7 pools along the creek and 7 hidden N's in tribute to Thomas' wife Nanette.

Thomas said of the painting…

Perhaps in a garden we are closer to our creator. We certainly are closer to His creation. My prayer is that this painted garden will be a meeting place for many that would speak to their God in the silence of morning.

The Garden of Prayer Collectibles

Thomas Kinkade's A Child's Garden of Verses: A Collection of Scripture, Prayers
See this listing

A Child's Garden of Verses : A Collection of Scriptures, Prayers and Poems by Ro
See this listing

This site contains affiliate links, which means that we may earn commissions, at no extra cost to you, through links you make purchases through. For more information, click here.